One of the problems that occur when newspapers use a chart from another source is that the original chart may have been perfectly fine visually using colors that did not cause any problems for most viewers. However, when the image is printed in the newspapers, they tend to forget that newspapers only print black and white (and to some extent shades of grey). Unfortunately, the shade of grey used for each color may result in shades for two or more colors that are too similar to each other. This makes it hard to understand the chart.

Recently I did a presentation for our local SQL Saturday annual event on bias in charts. One of the examples I used was from an old election chart showing which states were red states and which were blue. While I am sure that the original chart was clear when displayed in color, the black and white version of the chart used in the newspaper eliminated the differences between these two colors. 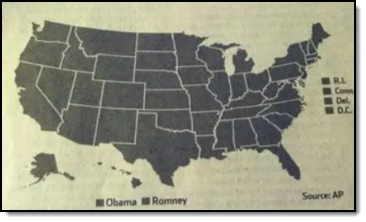 While this chart is obviously from several years ago, newspapers have not in the intervening years considered the effect of converting charts from other sources to black and white images. Today, I saw the following chart in our newspaper. 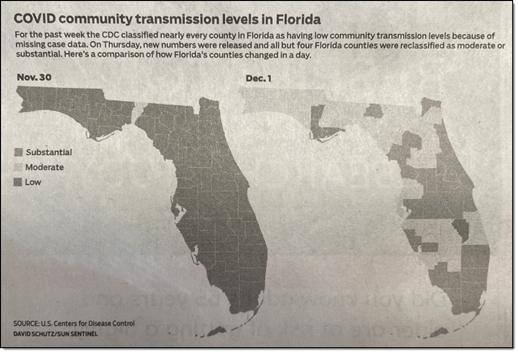 There may be some difference between the counties colored as Substantial and those colored as Low, but it is very difficult to tell even for me which color is which (a side criticism is that the grey scale does not follow a trend getting darker or lighter as one goes from Low to Substantial). My only clue as to what was going on was the statement above the chart that only 4 counties were not reclassified. Unfortunately, it is not entirely clear whether these 4 counties were previously Low or Substantial since both shades of grey are too similar especially in the legend boxes.

Since the chart listed the source as the US Center for Disease Control, I went out to their website to see if I could find the original images used. I believe that the image below may have been the source of the December 1, 2021 chart of Florida. 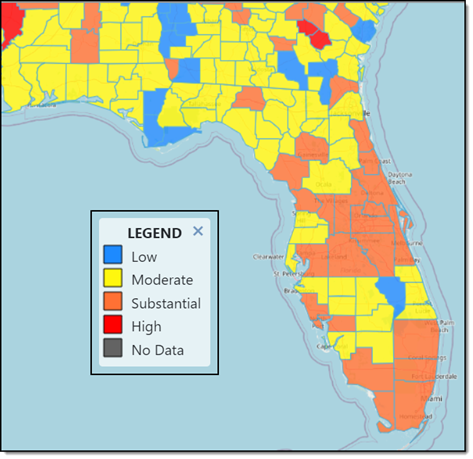 Assuming you can see color, this chart makes perfect sense now. Even the progression of colors from blue to red indicates an increased level of transmission.

If this was the source for the chart, the newspaper obviously modified the chart to remove city names as well as the line in the water which represents what? They also removed levels (None and High) from the legend that did not apply to the state of Florida. Finally, they trimmed off the counties from the surrounding states to the north and west. But why did they stop there? They could have refilled the counties with shades of grey that would have been easier to see and could have represented a progression in severity. Of course, it might have been better if the original chart used different fill styles other than solid for everything to help those who have no color perception.

My point is that too often we create charts that are pleasing to our eyes without considering that other people do not see with our eyes, but with their own eyes which may not see things the same way.